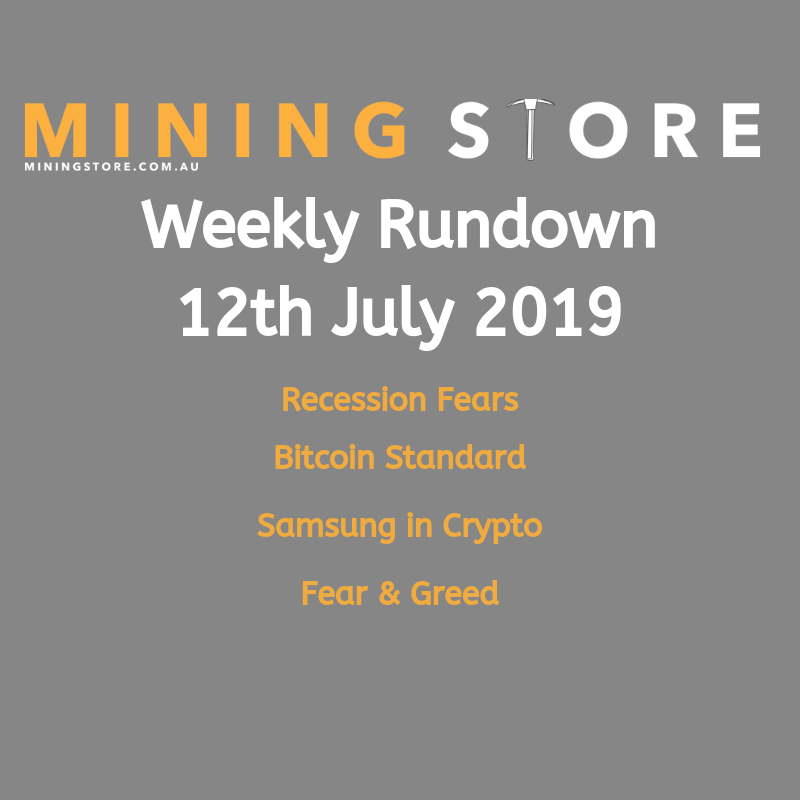 It’s been a week of recession fear and bank layoffs. Bitcoin has been resilient and seems to have settled in a fairly broad trading range of $10k – $13k USD, which begs the question as to how much money is leaving the traditional options of banks, bonds, stock and real estate investments behind and making its way into the crypto space.

Last week, Reuters reported that Deutsche Bank was axing 18,000 jobs and winding down its investment arm, looking to reduce risk to trading operations by about 40%. Even more surprising was the news of Deutsche Bank’s approach to restructuring its leverage exposure in the traditional investment areas which was valued at 288Billion Euros at the end of last year. The banking institution said it would create a “Bad Bank” called Capital Release Unit and use this to wind down all related assets and leverage.

The New York Fed’s recent Probability of US Recession Predictor has successfully signalled the start of several recessions in the past. The model uses Treasury rates and the spread between them, a negative spread between the two has preceded all post-war downturns, and it’s been negative since May. While this is just an indicator and shouldn’t be viewed in isolation, it does demonstrate a pretty damning future compared to historical trends, and if you take a macro view of world events, it does start to prove itself, for example, Deutsche Bank’s layoffs.

Crypto and tech entrepreneurs, the Winklevoss twins have recently commented on the bitcoin life-cycle, saying that “It’s the bottom of the first innings for bitcoin”. While the brothers have their fans and their haters, you can’t dispute the fact that these guys have built an empire around cryptocurrency as some of the first to believe in the space – leading a seed-round of investment for bitcoin in 2013. They continue to be dominant players in the space, not to mention they own about 1% of all supply in existence. You do the math.

No matter what you think of the Winklevoss twins, there is a lesson in backing what you believe in. Take some serious time to consider where you think the world economy is heading, and where you think your money is best placed to benefit you not just in the short term but in the coming decade. Like anything, be sure to seek advice from those in the know, do your own research and learn everything you can.

This week, Donald Trump announced Judy Shelton as his nomination for a position on the Federal Reserve Board of Governors. This could signal an interesting time ahead for crypto enthusiasts as prior to the Trump election, Judy Shelton had been a vocal critic of the Federal Reserve and has spoken about a return to a “gold standard”.  Shelton said, “We need to be thinking of a global unit of account, something like a gold standard updated to reflect a digital world and fast-moving financial flows.”

Sounds like bitcoin to me! “2020 – Year of the Bitcoin Standard”, I can see the headlines already.

**Crypto Quiz – Answer at base of article!**

In case you missed it, mid last year Samsung announced it had been producing chips for mining cryptocurrencies, like bitcoin, for a Chinese-based company. It was one of the reasons Samsung posted record profits for the year, bolstered by its Semiconductor division. Samsung said it thought the “foundry” arm of the business which makes the mining chips will become “number two” in the space at some stage.

This week Samsung announced it’s further developing crypto wallets and integration software on its next range of smartphones (Galaxy S10E, S10, S10+, S10 5G, and the Galaxy Fold), touted as the “superset of all SDKs” and will initially be available to Canada, South Korea and USA. The new SDKs will allow DApps to be developed cost effectively for Samsung meaning more web-based applications and decentralised applications to come! Other features will include generation, storage and backup for cryptocurrencies (ETH and ERC20), payment activities, authorisation of signatures and allowing users to link to cold wallets. It‘s been reported the Beta version of this software will also allow the creation of transactions and the result of that transaction will be sent to a blockchain node. Reading between the lines, it sounds like a tap and go payment solution built into the phone for all ETH and ERC20 tokens. And that’s only good news for the crypto space.

I talked about Peter Schiff and his love for Gold a couple of weeks ago. Schiff has always been an entertaining opponent to crypto which is why there was so much chatter in the community this week when it was discovered that he in fact owns bitcoin, albeit only in a pretty limited capacity  ($100 USD at time of discovery but now approx.  $3,000 USD thanks to donations).

@CryptoCurrency News also noted that his website accepts bitcoin as a payment method… this however was short-lived as once it was made public, Schiff responded that the wording on the site would be changed.

As the Pomp says @APompliano – “never listen to what they say, always watch what they do with their money”.

Earlier in the week the Fear and Greed index peaked out at 83, signalling it was nearing overbought status. Since then, we had s pull back on bitcoin from $13k to mid $11k’s at time of writing.