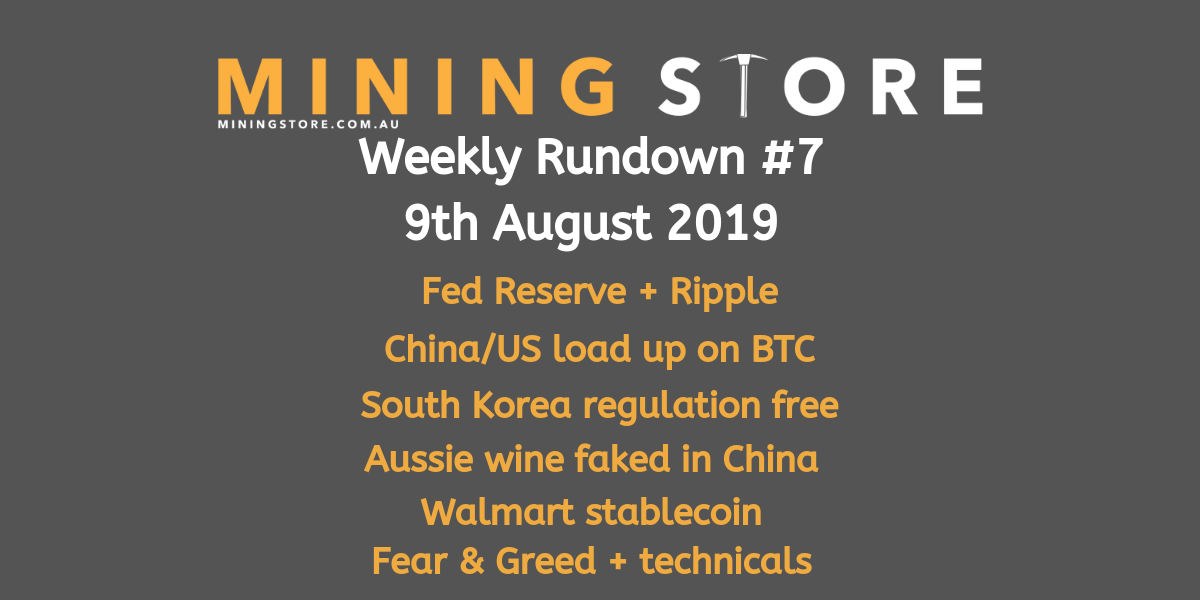 The US Federal Reserve Board has announced it will create a service called FedNowSM, a payment network “…intended to advance public policy goals for faster payments and to help support the modernization of the nation’s payment capabilities”.

While the announcement doesn’t specifically reference partners or blockchain, they do mention they’ve been working with fintech companies and hope to achieve 24x7x365 near-instant credit transfers up to $25,000 USD. A lot of chatter within the crypto community has been that XRP – Ripple would be the prime candidate for this. It’s a bit of a leap but if Ripple were used for this, it would be huge. Imagine having the Federal Reserve Bank of America teaming up with a top cryptocurrency to bring real time payments to its residents. Blockchain-based voting, government files stored on chain, a US stable coin maintained by the government? The possibilities are endless.

CHINA & AMERICA LOAD UP ON BITCOIN

The US/China trade war continues this week. It has already caused the Chinese Yuan to drop to 10 year lows against the USD and pushed Bitcoin up as much as 10% in a single day during Asian trading earlier this week. The further the Yuan drops and the more the Chinese government sanctions the movement of money out of its country, the higher the probability that Bitcoin will continue to rise, and sharply. Historically, China has been bullish on Bitcoin despite multiple efforts from the government to suppress its uptake. But the longer this economic uncertainty prevails, the more Yuan will flow into Bitcoin. Moving 1 bitcoin across borders is much easier than moving $10,000 USD worth of Yuan.

The same trend can be seen in the US, with residents buying more Bitcoin every quarter since Q1 2018. While a lot of this movement is based on generational investment appetite, the trade wars and global recession fears will fuel this. BTCManager quoted Barry Silbert of Digital Currency Group as forecasting trillions of dollars flowing into bitcoin in the US alone in the coming decades; “The fact that the “baby boomers” generation will be retiring over the next 25 years is causing a massive wealth transfer to millennial’s who appear to have a strong affinity for bitcoin investment.”

Coindesk reported that Busan in South Korea has been declared a “regulation-free” zone for blockchain development by the South Korean government. It looks to be emulating Switzerland’s, Zug, which is extremely liberal in its legislation and crypto. The government hopes the will become a testbed for the token economy with a mixed industry comprising new blockchain start-ups with existing fintech companies. But it’s worth noting that ICOs will not be included in the regulation-free zone and will remain prohibited.

Busan is going so far as to issue its own digital voucher, essentially a stable coin designed to act as an experiment for tourists and businesses alike to transact throughout the area and convert to the local currency upon leaving should they wish. The Busan government said, “We are expecting to build a blockchain ecosystem where the rewards, payments, and settlements are organically connected.”

Sounds to me like South Korea is trying to front run the rest of the world to a fully blockchain based society and state. Incredible to think that technology hardly more than 10 years old is the basis for countries to consider change this significant.

Australian wine producer Penfold’s, best known for its limited Grange release each year, is teaming up with VeChain’s wine traceability platform to help fight counterfeits. According to the drinks business in 2017 over $3.8 million worth of Penfold’s counterfeits were sold through certain regions of China. The numbers for the greater Chinese region or the rest of the world is unknown but one would expect that figure to be significantly more. VeChain estimates since implementation, sales have jumped by 10% due to customer confidence being restored in the region. The platform is currently being trialled on all Bin 407 bottles.

The chips will work in a way that customers can scan in store and access the relevant wine bottle’s immutable product information stored on the blockchain, including provenance information verified by independent auditors. Images: source here

WALMART SHOPPING FOR A STABLECOIN

US retail giant Walmart has submitted an application to the US Trademark and Patent office for a digital cryptocurrency “tied to a regular currency”. Basically, they’re talking about a stable coin, similar to Facebook’s proposed Libra coin. Some features of the Walmart coin that separate it from Libra and others include:

The Fear & Greed Index is sitting at 61. While this is technically identified as greedy, the reality is it’s a pretty neutral stance. The week has been a tug of war between both bulls and bears shaping up around global recession fears, trade wars and further reductions in interest rates. Interpreting this index for the week, I’d be leaning towards a take-no-action approach and continue a dollar cost average investment instead. Shifting attention to the longer term, it appears healthy and we continue to see a flow of funds into safe haven assets like Bitcoin and gold.

August has seen a clear negative correlation between the US Dow Jones Industrial and the price of bitcoin. Many experts suggest this is due to the continued fear around an impending recession, this leads investors to resort to Bitcoin as a long-term store of value. While gold has played this role solo in the past, investors are now open to at least including Bitcoin, partly due to its 21 million supply limit.

On the topic of long-term store, I take heed from the professionals, among them, Thomas Lee from Fundstrat who commented that “Bitcoin is mimicking a safe-haven asset because its correlation with other assets more linked to geopolitical news has diminished” and that “Bitcoin is still facing tailwinds, especially over the next four to six weeks … But still, the ‘crypto winter is likely over”.

So, warm-up people and look towards a sunny crypto future ☀️