In today’s report, we are taking an in-depth look at the technical structure of BTCUSD. Firstly, as usual, we will digest the recent fundamentals in the crypto space.

Digital asset investment products attracted $151 million last week, cooling from prior weeks but remained positive. Bitcoin-related funds are still at the forefront of the majority of the capital. There has been a decline of inflows for four consecutive weeks which is beginning to show on the RSI and we analyse this later in the report.

Last weeks inflows are some way off the level of investments seen during the BTC futures contracts debut a few weeks ago in the US.

Despite a decrease of capital inflows, the fundamentals around BTC still remain positive and there has been no significant change since our last report. Australia has followed America’s footsteps as ASIC approved Bitcoin and Ethereum ETF’s. Australian fund management company BetaShares’ new crypto company exchange-traded fund (ETF) smashed Australian Securities Exchange (ASX) records within the first 15 minutes of listing. The Capital Appreciation Portfolio Diversification (CRYP) fund enables investors to gain exposure to 50 pure-play-listed crypto companies from around the world, such as exchanges, mining companies and equipment firms. This is another example of wider adoption across the general public along with easier public access.

Fundamentals are positive, however, you should be aware of the short term technical structures even if you are a long term HODLER.

When we are breaking down the charts it is important to remain unbiased and dissect what we can see. Here are a couple of indicators suggesting a possible short term top is in play, and a move towards the 55k support is a possibility. 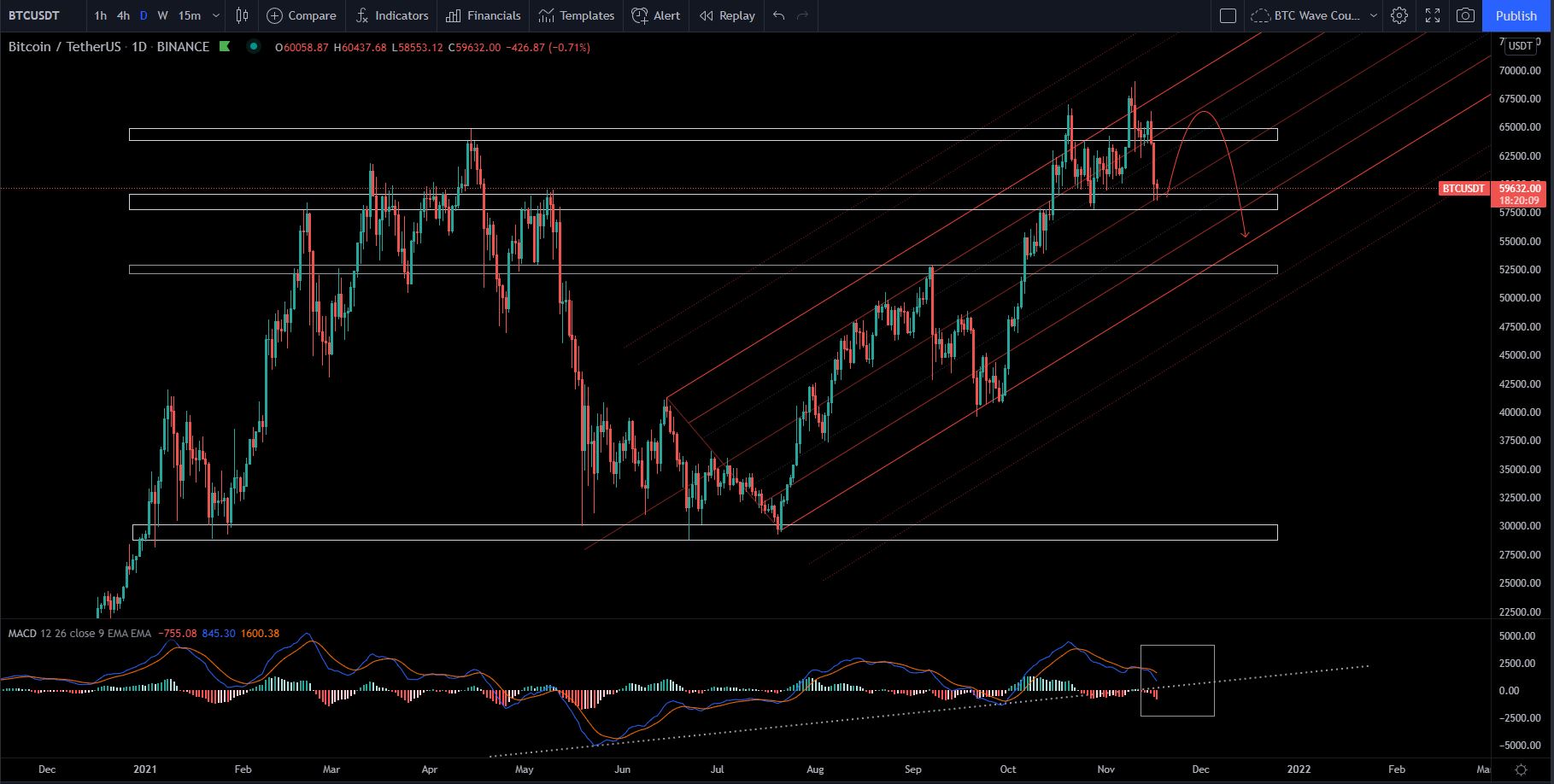 Firstly, there was a perfect rejection from the upper band of the rising pitchfork structure. No doubt there would have been profit-taking at these levels especially considering the fact that every person who had purchased BTC previously would have been in profit during the record high. BTC is trading on support at 60k USD which is giving us some protection in the short term. The MACD is trading on a key trend line support, a breakdown from the trend line support would indicate momentum is shifting in favour of the bears.

When looking for a top in the market, the majority of previous peaks form a technical structure known as a head and shoulders formation. If you cast your eyes back to the April/May peak there is a clear head and shoulders structure that broke down past the neckline support. This was also paired with a bearish divergence on the RSI. A bearish divergence is formed when buyers run out of momentum and less liquidity is moving into the market. Which has been highlighted in the level of capital inflows over the previous weeks. The spot price action forms a higher high, whereas the RSI forms a lower high due to lower volume. 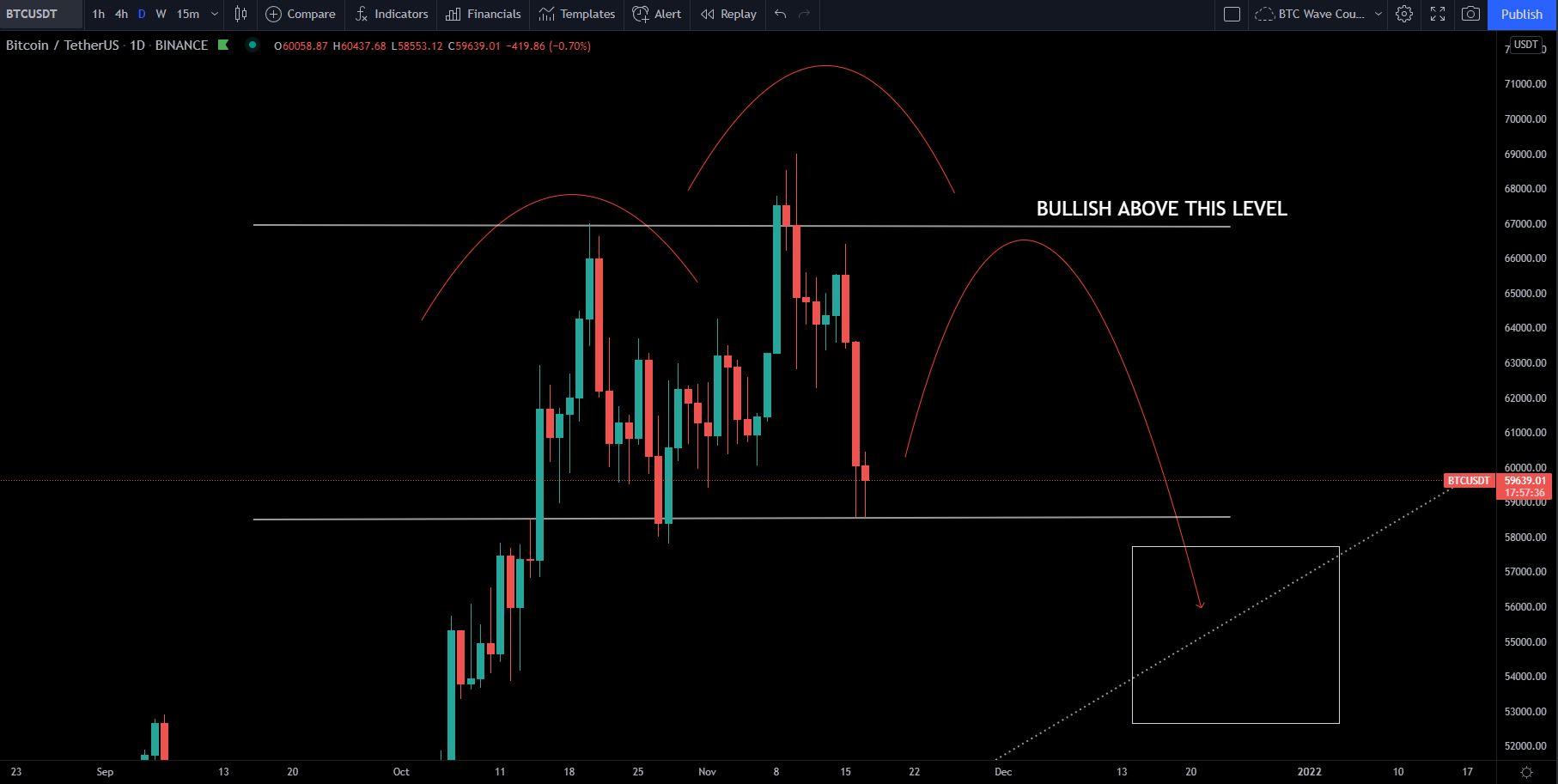 Technically speaking, BTC is potentially in the early stages of a head and shoulders formation, the right shoulder is yet to form. If BTCUSD moves back towards the 68k resistance and begins to move lower there is a chance of a breakdown and a deeper correction towards 55k USD. However, don’t panic, the real bearish signal would be a breakdown from the rising trendline support.

On the BULLISH side of the coin, a break above the left shoulder resistance of 68k USD would suggest bulls are back, and a move into the record-high territory is a possibility. For this to occur, there would need to be a pick up in fresh liquidity coming into the market.

During the consolidation phase, it is important to remain unbiased and be patient for the price action to unfold further. Don’t panic, set yourself a plan if you are a more short term investor. If you are a long term HODLER these pull backs could provide an opportunity to increase exposure in the market.

If you are looking to learn more about the technicals behind trading cryptocurrencies, our brand new Trader X Blockchain course is live with a couple of spots remaining.

Use coupon code: EARLYBIRD at the checkout for 50% off.

If you have any questions on the analysis above, please reach out to tony@miningstore.com.au