The White House and Joe Biden signed the executive order on digital currencies on Wednesday.

The entire brief can be read here.

In doing so, the U.S. government has directed agencies across the federal government to coordinate strategies to gauge both the advantages and disadvantages posed by cryptocurrency ownership, and whether the U.S. needs their very own U.S. digital currency. 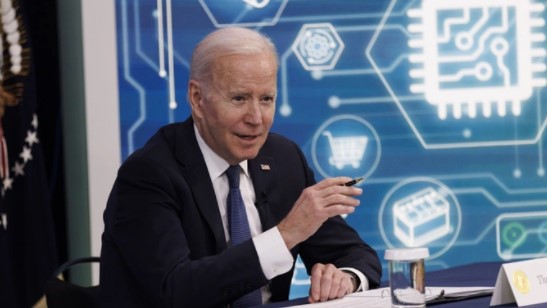 The new executive order is the Biden administration’s broadest attempt yet to regulate the fastest growing industry on the globe, in efforts to protect the U.S. economy and it’s consumers and investors.

Per the White House’s statements and releases, “digital assets, including cryptocurrencies, have seen explosive growth in recent years, surpassing a $3 trillion market cap last November and up from $14 billion just five years prior. Surveys suggest that around 16 percent of adult Americans – approximately 40 million people – have invested in, traded, or used cryptocurrencies. Over 100 countries are exploring or piloting Central Bank Digital Currencies (CBDCs), a digital form of a country’s sovereign currency.”

The executive order specifically calls for measures to:

“First, digital currencies are an inevitability in the ever more digital world that we live in. When tech is driving the way we live, work, do business and much more besides, it makes sense to have money that runs on tech too. Also, it must be remembered that millennials – who are set to be the beneficiaries of the largest ever generational transfer of wealth [according to some estimates US$60 trillion] – have been raised on technology, they’re digital natives. As such, the future of money is also, without doubt, going to be digital. For this reason, around 90% of governments around the world, representing 90% of global GDP, are actively pursuing their own central bank digital currencies (CBDCs). China might have been the first large, industrialised nation to launch a CBDC with the digital yuan, but it will not be the last. Far from it. Indeed, the U.S. now appears to be playing ‘catch up’.

“Second, the U.S. government will not be moving to ban cryptocurrencies in the world’s largest economy. In fact, the executive order is calling for a ‘coordinated and comprehensive approach to digital asset policy,’ and in leaked documents it seems to already be championed by Janet Yellen, the U.S. Treasury Secretary.

“And third, a digital dollar would underscore why the world will still want cryptocurrencies, such as Bitcoin. The Federal Reserve’s potential new currency would have many advantages, including convenience and speed of payments, but what it would not have is privacy. Indeed, a digital dollar would serve to give U.S. authorities even greater oversight of citizens’ transactions. The government would be able to trace all transactions. Washington would have even more powers to track and control.

Nigel Green added that Bitcoin and cryptocurrencies run on an open, immutable blockchain, or distributed ledger, which gives them the upper hand.

As a result of the draft of the executive order being leaked just prior to being signed, Bitcoin went up 8% almost straight away, with over $100 billion flowing into the global cryptocurrency market. However, in the last 24 hours, the market has fallen, with Bitcoin now priced at $38.4k and down roughly 6% for the day.

Seemingly, the news is neither good nor bad. The executive order seems to have portrayed the idea that it is “business as usual” for the U.S. government. Clearly it was good for cryptocurrency in the immediate short term, what it means for the long term, will have to play out. What is absolutely crucial is that the U.S. government is now acknowledging the seriousness of the cryptocurrency asset class and blockchain technology.